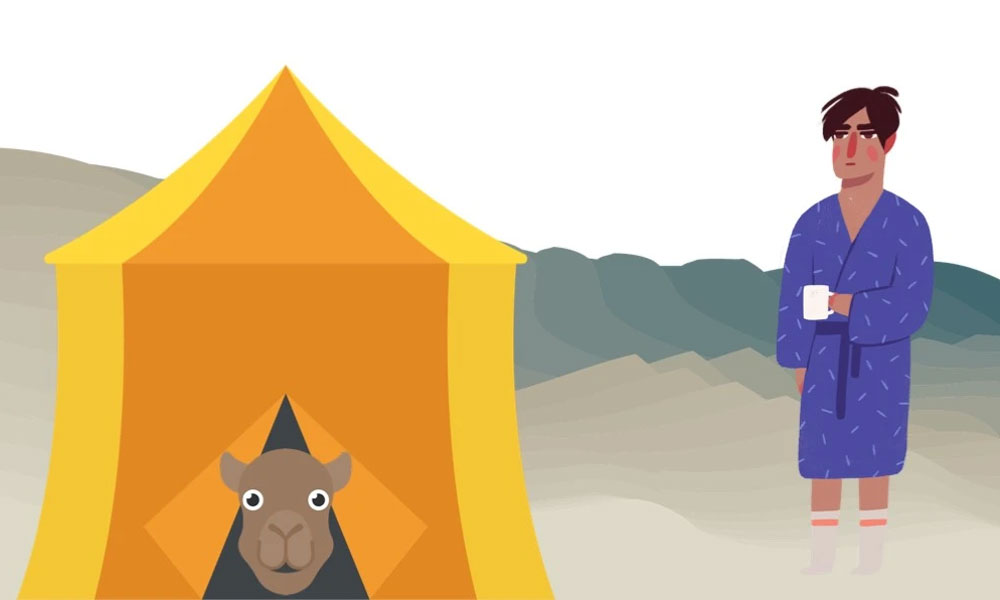 This season I wish to learn the ability to refuse and reuse. You must be thinking why would I speak of something like this out of the blue? Let me tell you a story of a man who was walking the desert with his camel.

If the man had refused the camel’s first proposition, one would imagine that things wouldn’t have got that far. However, we know how this story ends. The good news is that one must practice the art of refusing. But this story holds a deep moral. It actually talks about our habit of holding on to objects, valuable or sentimental, blocking the energy within one’s surroundings. What does one mean by block? Imagine a room with a bed and a chair. Let’s keep a writing desk in the corner. Make the curtains blue. Imagine a window with a full-sky view. Now, let’s bring in a 40-inch television screen, a cabinet for added hoarding, a chest of drawers, two file cabinets, a dressing table, two bedside drawers, and another chair. This is a physical manifestation of the tendency to hoard objects.

Like the camel in the story, it begins small and gets out of control quickly. A clear manifestation of compulsive hoarding is a disorganized space that restricts movement and living. Typically, people who suffer from compulsive hoarding also tend to lose money or papers, buy things because they are a ‘bargain’, distrust people around themselves constantly. For instance, if one is unable to stop taking free items, such as advertising flyers or sugar packets from restaurants, it is time to stop and think again.

But this is not the only kind of hoarding known to men and women. Deep Smarts stand for the deepest knowledge and understanding held by only certain people within an organization (Leonard & Swap 2004). People with a tendency to hoard will not share these practices with colleagues for reasons such as envy and selfishness. This behavior puts companies at risk and presents real challenges in terms of productivity.

Now, let me ask an important question: Is collecting things the same as hoarding? Well, no. A collector is more likely to display his or her collection and feel proud to organize and keep them. Hoarders seldom look to show, and their possessions are usually kept in disarray.

When the man walked the earth, without a roof over his head, he knew that he could take only what he could consume. There was no room for the rest. But home was found, and then the man began to keep a few things away for a rainy day. Years turned into decades, rainy days came and went, but the man kept finding more things to tuck away.

In 2021 the world finds itself struggling for balance. The way ahead is to refuse what we do not use, reduce what we already have, and reuse as far as possible.